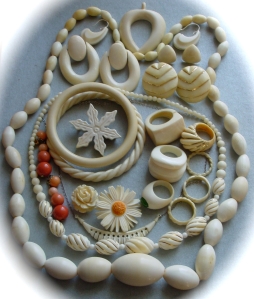 I have a large collection of ivory jewellery. Mostly pieces that I have found at thrift shops and antique stores. I am of mixed emotions when it comes to ivory — I would not want to see an elephant killed for its tusks. On the other hand, this stuff already exists and if an elephant has already been killed for fashion’s folly, it would be wrong to throw what it died for into the trash.

Mostly these jewels sit in a box because of my conflicted feelings. But I do wear them. Once, I was going to NYC to visit my friend Gary. I was flying Porter Air straight from work. It was a summery day and I had decided to wear a bunch of ivory because it suited my ensemble. Then I remembered, you can’t cross the border with this stuff, so I took it all of. My office mates asked me why. I said it was a banned substance. They laughed and then realized that I had been walking around all day in dead elephant and were horrified. Of all of my creepy jewellery (things made of human hair and tortoise’s shells, etc.), ivory is the one thing that freaks my niece out.

How can you tell if a piece is made from elephant ivory and not bone (you might want to know if you don’t want to accidentally buy ivory)? Look closely and you will see little cross hatched lines (called Schreger Lines) when you hold it up to the light.

← A Hasty Post About Some Stuff That I Bought
Collection Week: Tortoiseshell Jewellery →