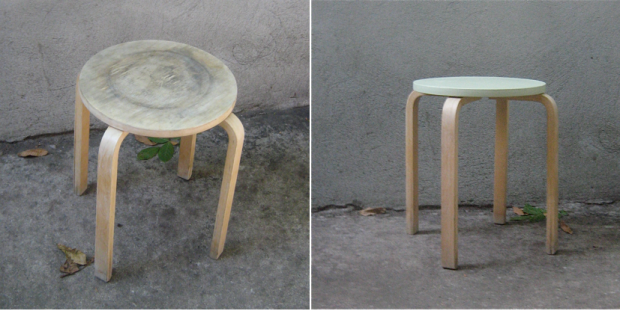 A goal of this austerity October was to try and finish up various DIY projects I’ve had on the go for months and even years. I already wrote about the reupholstered Steelcase Tanker Chair, but I was able to manage to fix up a bunch of other things.

My most hands on project was upcycling a rather worn, faux Aalto birch stool from Ikea. It was a sidewalk rescue and looked like it had been sitting outside for ages, but I had an idea to repaint it and use it as a portable nightstand (because of our underbed storage situation, we can’t have a permanent bedside table).

I had seen authentic Alvar Aalto stools at Mjolk that had different-coloured tops, and I thought I could replicate that look. As luck would have it, West Toronto Paint at the top of the street was giving out little samples of Benjamin Moore’s 2015 Colour of the Year, Guildford Green, which was the perfect soft shade for my project.

The next step was disassembling the legs and top then regluing the veneer in places where water damage has caused it to lift up. Once that was set, I sanded the table top and legs and then added a few coats of paint to the top. I was a little lazy and just used whatever sandpaper was lying around. I should also note that the paint is an interior latex and so the stool is destined for a life of inside service from now on.

Once the paint had dried, I reassembled it and brought it to our bedroom, where it belongs.