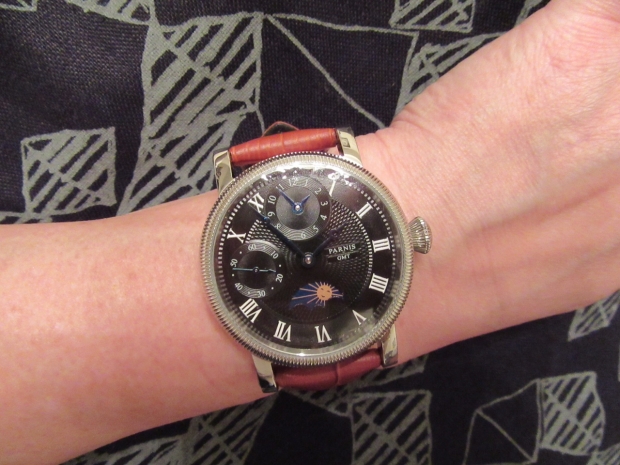 Now that we’ve more-or-less settled into the new pad and now that I’ve got my wardrobe almost pared down to perfection, I find myself becoming obsessed with watches again. More specifically, I became intrigued with the Chinese watchmaking industry which lead to an obsession with wearing an actual example on my wrist.

In fact, a whole kettle of obsessions brewed up this acquisition. One. I’ve been having a moon moment, and my liking for lunar motifs had me exploring watches with moon phase complications.

Two. Earlier this year I became a little obsessed with fake luxury watches. I could never buy one, but I have felt the pull that leads others to buy a knock off. I’ve gone down to Canal Street and held a counterfeit Pateks and Audemars Piguets in my hand. I could hear a voice in the back of my head trying to rationalize spending $300 on a fake as research that looked good from a difference. But the whole business made me break out in a hot sweat. Fakes are tempting but they are also bad news bears.

Three. I kept reading about mushroom and homage watches on various online forums. Basically, these terms refer to made-in-China watches that seem to sell only through second party online platforms such as eBay. Mushroom refers to the brands that seem to pop up overnight like the proverbial fungi. Homage refers to designs and movements that reference historical timepieces. These watches are not necessarily restricted to Chinese Manufactures.

Four. I wrote a Watch & Learn column about John Mayer (who is my style spirit animal), which led me down a rabbit hole of images of Mayer’s watch collection. which led me to crave his AP Perpetual Calendar watch.

I spent hours trawling through eBay searching for a perpetual calendar with a moon phase. Sadly, there was no way in hell I could afford a nice-looking one. But an auction for the Parnis popped up and it caught my eye. Clearly this watch is not an AP — in fact it has more than a few stylistic nods to the IWC Portofino, but with just enough flourishes to make it distinct. It was also advertised as an Automatic and a moon phase, it was clear from the photos that it was a hand wound and  the so-call moon phase was just a day-night indicator. Still, it had a moon on it and  the starting bid was just $45 and it looked real purty. So I took  chance and bid.

I’ll jump back in the story a little bit. There is a fine tradition of Chinese watchmaking, but it was disrupted by communism. As a result, the existing manufacturers were somewhat isolated from the global timepiece community. And when China’s borders opened up for international trade, the country became known for cheap, mass-produced timepieces. There were exceptions, of course. For example, Sea-Gull’s movements can hold their own with many  Swiss companies.

In fact, Sea-Gull has been producing all sorts of prestigious watch complications, such as perpetual calendars, quarter repeaters, minute repeaters, moon phases, retrograde dates and perhaps the fanciest complication of them all — the tourbillon. And they are producing these super complicated timepieces for under $10,000. One of the reasons that they can afford to offer these watches so cheaply is their unique method of distribution. It would appear that legit watchmakers outsource distribution to entrepreneurial types. These businesses are encouraged to sell online, especially through sites like eBay. That way they can keep their overhead low (and this business plan opens up a whole other, equally fascinating look at the watch world that I won’t get into here because it would require more robust reporting).

So Sea-Gull had a good rep, but as a first-time buyer, I could not bring myself to roll the dice on a $1,000 moon phase. So my next stop was Parnis, a brand that shows up a lot in online discussion of homage watches. A quick Google search shows a lot of styles that are highly evocative of Panerai and Rolex, but of vintage models that are no longer in production. On the plus side, many Parnis watches have Sea-Gull movements and whatever the online community thinks about Parnis and homage watches, they are no fly-by-night mushroom brand.

So far I’m pretty impressed. The finishes are solid with details like the coin edge bezel, fluted onion-dome crown, blued hands and a guilloche dial. The hands on the main and GMT sub dials line up perfectly. And the crystal case back reveals a striped movement with blued screws. And it’s all set on a handsome brown, embossed leather strap. It keeps great time and has a good power reserve — one winding keeps it running for two days.

There are some slightly sloppier things — the numerals could be sharper and the design of the sun and moon could be more sophisticated. But then again, $45. I like it a lot but in the long run it only fuels my fire to get a real IWC moon phase. I will be patient and wait until I either come across a tremendous deal whilst thrifting or until I save up enough pennies to buy one. But in the meantime, I’m over the moon about my Parnis.