Mr. Andrew and I took a mini-vacay to Las Vegas last week. We went there because it was cheap and warm. Well sort of cheap. We spent most of our money on experiences like seeing Marsha Warfield and Penn & Teller and eating all the Mexican food we could. 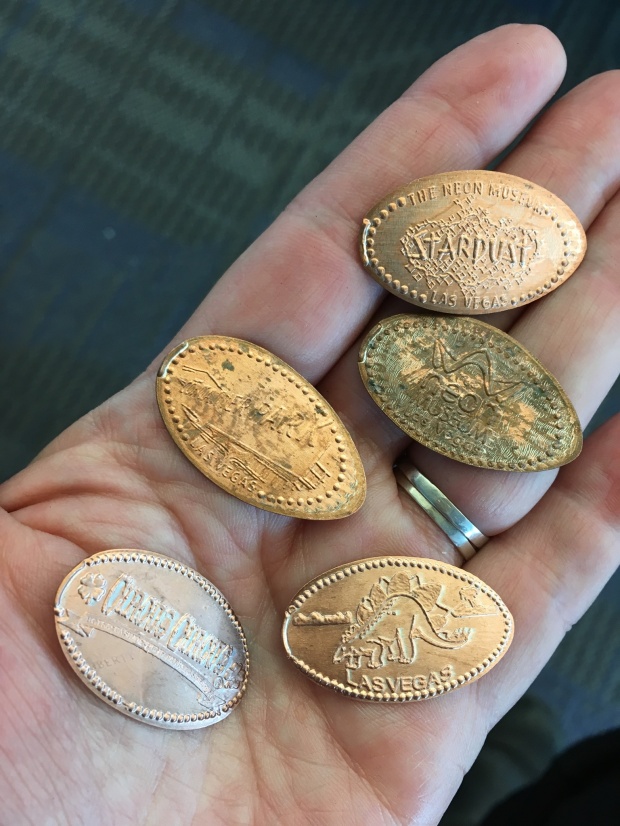 I do have to sample shopping in every city I visit. In Las Vegas, I was hoping to find a jade bangle, some southwestern art and jewelery and something that would represent peak 1970s Vegas. And all for under $100.

We started collecting smashed souvenir pennies on day one. They cost 51 cents each. 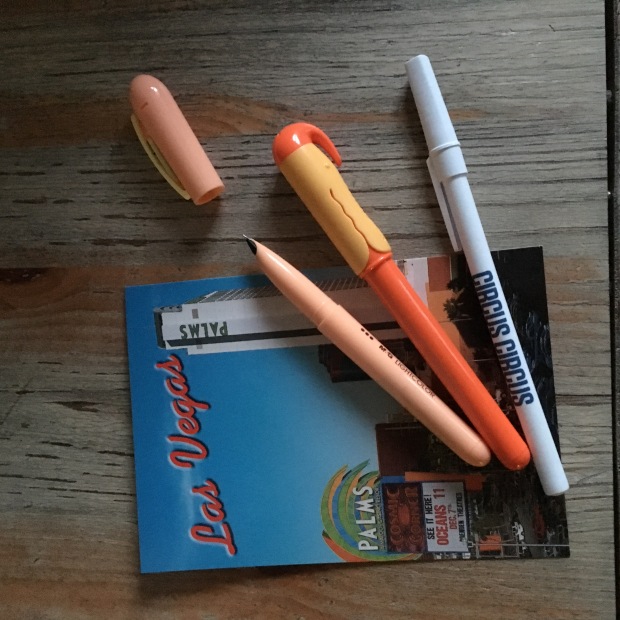 I wrote about these fountain pens already, but I also took this Circus Circus pen from our hotel room and bought the world’s ugliest post cards from a souvenirs shop. It was like 20 post cards for 75 cents.

I forget to bring rings with me on our trip. After a few days the lack of finger weights was making me feel unbalanced. I had seen these made-in-Mexico rings at a so-called Trading Post store on Fremont Street. I resisted them for days partially because most of the stuff on sale was Chinese made knock offs of each, I finally caved. I want to get a swear word engraved on the eye-shaped ring.

We also got a little tipsy and bought the Las Vegas souvenir sweatshirt pictured up top because it was $12.95 and I had spilled green bean sauce on my shirt when we went for Dim Sum in Chinatown.

On our last day, we went to the 18b Arts District. There is a strip of second-hand stores there. I found this glitzy 1970s Girard-Perregaux for $30 at a turnkey-type antiques mall. A funny story: I’ve had it in my head since I was I  St. John’s that my next big watch score would be a GP.

And I got this Route 66 Wolf Katsina doll at another Antique Mall for $5. And the lucky rabbit foot (from a curiosity shoppe that also had all kinds of cool and creepy stuff) was also a fiver. I never did find nd an affordable Jade bangle, but at least the foot is green.