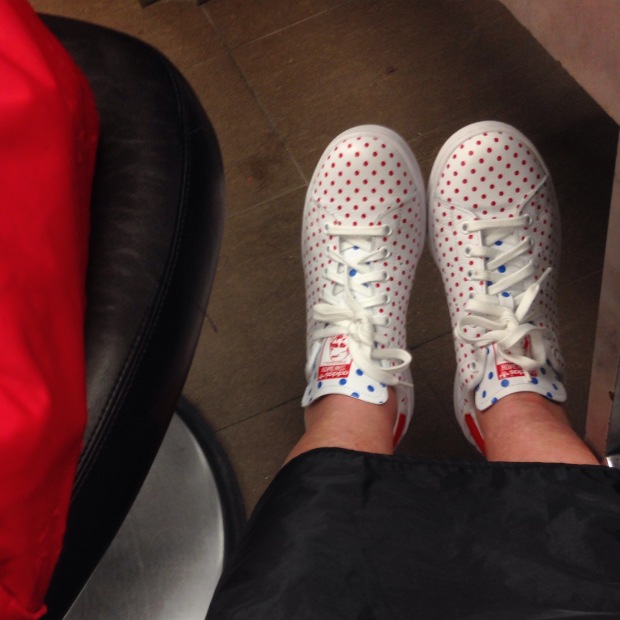 I try to not spend money. But the freebie sidewalk finds can’t fill all my needs. And when I do spend money, I try to be good to the planet by purchasing gentry usee goods. But I’m also learning that for some things, such as shoes, second hand is not always the most sensible solution.

And speaking of sensible shoes, I’d been obsessing over white Stan Smith Adidas for a couple of months, but couldn’t justify the purchase of a pair because I already have a perfectly good pair of trainers and a second pair is not in the budget. Then I spotted these dotted Pharrel Williams X Adidas sneakers on the clearance rack at Winners. And the shoes I was wearing (second-hand oxfords) were hurting my feet and the Stan Smiths were affordable and I like polka dots. So I bought them.

I also bought this pair of polka dot socks earlier in the week at Old Navy.

Why was I at Old Navy in the first place? It’s a long and familiar story. When we were Iceland, there was a woman in our Hostel that had the cutest pair of black, deconstructed linen overalls. I’ve seen similar jumpsuits in a shop in Reyjkavik and a boutique on College Street, but both examples cost about $300. And I’ve already  got rompers galore.

But none of this matters when I set my sights on something. Imagine my delight when I spotted a similar look online and on sale at Old Navy. Imagine my chagrin when I went to the checkout and they were already sold out.

On Tuesday, I was out for my exercise walk. I tried going sockless for the first time this  spring. About one half hour into my amble, I felt a blister being born. I was near the Old Navy in the Stockyards so popped in to buy some hosiery (see above). I figured that while I was there, I should check out the clearance section to see if they had any of those linen jumpsuits. And they did — but in XXL.

I bought them anyway. And I altered them (hemmed them up, added gathers along the top and took in the sides) myself I am proud to say.

So there you go, an overlong story of obessesion and sore feet.

One thought on “What I Bought”