Whilst in New York for business last week, I went to Uniqlo and bought another Kaws Snoopy, albeit the smaller version. There are a couple of reasons why I wanted this doll —  the cat had claimed the original, large version and I thought I should have a Brand New With Tags to keep as an Art Multiple, and it would make a good pillow for the bus ride home.

While the latter proved true, I momentarily left ’lil Black Snoopy behind when we switched buses in Buffalo. When I went back to retrieve him, the driver had thrown him in the garbage and tossed stale coffee on top of him. He came clean after a run through the washing machine but the mint condition was lost.

Anyway, the arrival of ’Lil Black Snoopy led me to do an inventory of my stuffed animals, of which I have many. Let me introduce them.

Above, clockwise from bottom left: my oldest friend in the world, Elephant; Saul Paul Polar Bear; Polar Bear; Little Polar Bear and Ben Elephant the Benevolant Elephant. A note: Mr. Andrew has mocked my animal naming abilities and started rechristening  my plush pals with the addition of Ben Elephant, who was a gift I received from my family for my 40th birthday.

Another note: My family got me an elephant either because they thought I must have lost my childhood friend, or because they thought that I was really still into stuffed elephants. For a long time, all familial gift-giving revolved around cat-themed gifts based on the assumption that because I had a cat, I would want coffee mugs with Garfield on them. I don’t drink coffee.

I must say that Mr. Andrew is pretty adept at naming things. Pictured above are Scoots Badger, Slamdunk Skunk and Slabberjaws the Penguin. Every plushie has a story: I got the skunk while visiting my parents summer trailer with my nieces when they were small. I won Slabberjaws at the CNE. And I just like badgers. 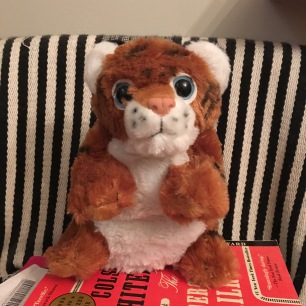 I’m also a big fan of jungle cats (I guess my family were right about the felines). Here are two tigers, Jambo Jumbo (who transforms into an elephant and whom I bought because I love things that transform but that’s another post), and Jank Saromon, who I won at the CNE.

I consider some of my stuffies to be soft sculptures. Like the Scoots the badger and Wally Wolodarsky here, they are somewhat totemic. Walruses are an animal of the north and so Wally is a symbol of my Labradorean lineage.