The New York Times is sharing a bunch of Quarantine Craft projects by influential designers that readers can make at home. The idea was inspired by patterns and projects that used to feature regularly in “Women’s Section” of newspapers and in homemaker magazines. Somewhere I have a collection of such projects that my grandmother assembled. These were mimeographed pages that you got in return for sending a “self-addressed stamped envelope” to a P.O. Box.

For my grandmother and other women, making these things was a bit of a cottage industry. My grandmother’s fortés were crochet, embroidery and knitting. I’m guessing that her business was mostly word-of-mouth but I do recall her selling baby sweaters and the like at a table at the Stanley Park Mall in KItchener. 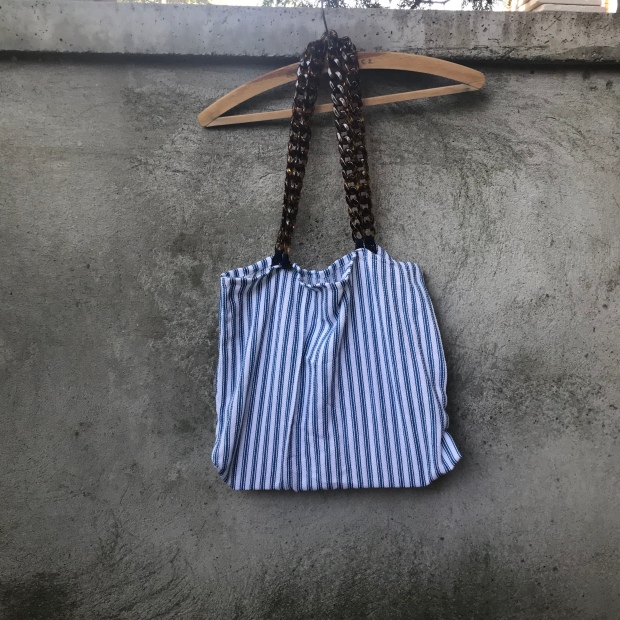 Of the many NYT At Home projects, which are mostly meant to be made with objects you can find while sheltering in place, I chose to make Rodarte’s Tea Towel Purse — a handbag made of a tea towel with two plastic necklace for handles. Please note that this was the most impractical project because I have millions of tote bags. But I wanted to say that I had designer handbag!

I totally cheated and bought a clean stripes cotton tea towel for Dollarama and two tortoiseshell plastic chains from Michaels. It turned out pretty well, I think.

Amongst my millions of purses are three examples of DIY handbags from the past. The oldest one dates from the early 20th Century. It’s a simple drawstring bag with intricate appliqué of deer on one side and flowers on the other. It was probably made in an independent atelier as opposed to somebody’s grandma’s kitchen and sold through an early department store.

The second example is a little more homespun. I have seen instructions for these drawstring bags online. It is a simple felt sack with appliqué flowers. Whoever made it could choose from many different floral arrangements. This probably also dates from the 1900s to ’10s. I really must do more research.

The last example of cottage industry purse is this yarn embroidered burlap bag. I think this kind of project was most popular in the 1930s and 1940s but probably carried on into the ’50s. Most homes had to economize and often repurposed old burlap sacks to make hooked rugs and embroidered handbags because their loose weave made a good base for needlework. I have seen hundreds of variations of this bag style online, but this is the only one I’ve come across in the wild.

← This Charming Planet
Making Out →