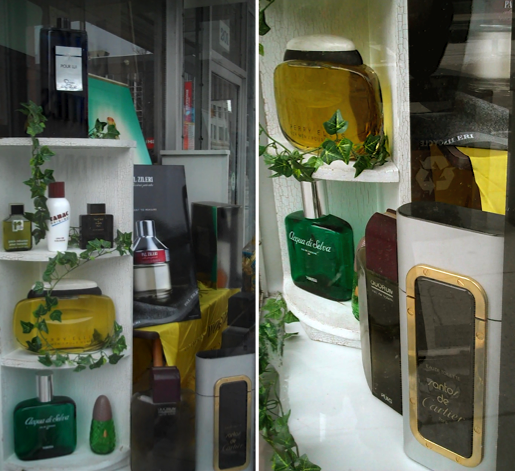 When I was in K-W for Easter, I stopped by a shop called Fritsch Fragrance. A pharmacy that opened in 1959, it has pretty much operated as a beauty and cosmetics boutique since the ’60s.

While it wasn’t open when I visited, I got all creepy and took pictures through the windows. While it still operates as a business, I think of it as a museum because it has so many old-timey products in stock. in fact, the only things I’ve ever purchased from Fritsch were Helena Rubinstein eyeliners and lipsticks from the ’60s and ’70s (I was propping for a photo shoot).

Anyway, I thought I’d share some photos and talk about some of the iconic scents found within. Amongst the notable notes pictured in the tableau above are a trio of men’s fragrances. Let’s start with Paco Rabanne Pour Homme, a woody scent which débuted in the ’70s. Housed in a bottle designed by Pierre Dinand, it won a Fifi (the perfume world’s Academy Award) in 1975.

For a manly, mid-century fragrance, there’s Tabac in 1959. A blend of bergamot, neroli, lavender accented with tobacco, oakmoss and vanilla.

And finally there’s Santos de Cartier cologne. Launched in 1981 and inspired by the legacy of aviator Alberto
Santos-Dumont (who also inspired the Cartier Santos watch). The scent is known as a very masculine scent with a sharp, spicy juice.

Tomorrow we’ll take a look at some iconic bottles.