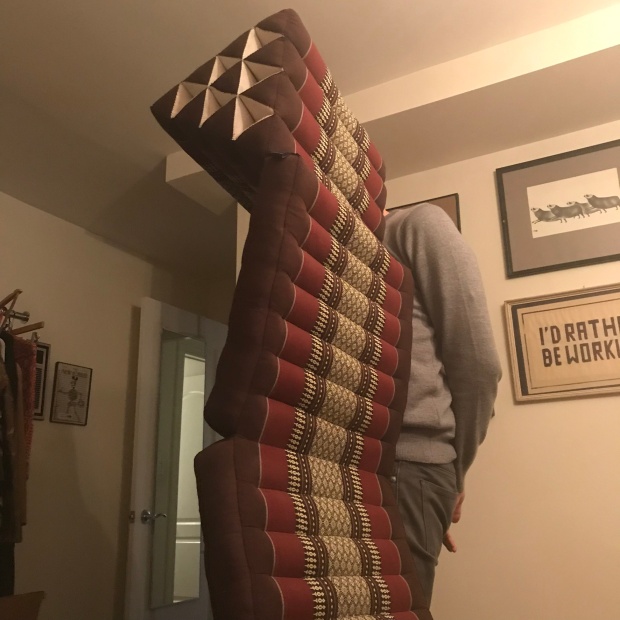 It’s been almost two weeks since my knee replacement surgery and my oh my the time has just flown by.

I knew that this operation was going to be painful and recuperation would be long. So I hoped to find a silver lining in being bedridden. I hoped that being grounded would help me spend less money. That hasn’t really happened. When the aches keep you up all night and you can’t ever get into a comfortable position, you will pay anything to have a few luxuries delivered to your drawer.

We rented a few things in anticipation of my discomfort — you know, walkers, commode chairs, etc. And, based on the advice of many friends, I ended up buying an Össur Cold Rush machine. It wasn’t cheap and I would have preferred to rent or bought one second hand, but it has been a life saver. Basically, it works like an ice pack and a compression device to reduce swelling. The advantage that it has over ice packs if that you basically strap it on and forget about it rather than having to juggle melting bags of peas. I am most grateful to this device because it also keeps you cool after working up a sweat after doing physio exercises. And the cold also helps with the pain.

The pain was excruciating once the drugs wore off. Then my discomfort settled down into a dull, constant ache. This feeling is only exacerbated by the fact that our couch and bed are both too low and too soft to manoeuvre.

There is also much suffering causes by boredom. Friends keep messaging me to recommend Netflix shows and other activities, but if I can’t get comfy, I can’t even concentrate on a five minute cat video. I can, however, focus enough to research ways to get more sleep. On the knee replacement forums, other users recommended sleeping in your recliner. The only problem is that I have no La-Z-Boy, only highly impractical mid century modern furniture.

A friend suggested getting a zero gravity camping lounge and setting it up inside. I did some research and it just seemed like it would be difficult to get in and out of. And again, I couldn’t find a place that rented and I’m pretty reluctant to bring new stuff into the house.

Instead I bought a Thai massage roll up mattress. It’s basically a narrow futon stuffed with kapok that folds up into a triangular cushion. We put it on the couch to add height and firmness. I was looking into buying one anyway and knew that it would have usefulness after I recovered. I’m still not ready for spending hours in front of a TV but it was comfortable enough for me to last more than two hours sitting on it.

← Everybody Hurts
All I Want →