Lining Up For Merch

I’ve always been intrigued by people who wait in long lines to buy stuff. I’ve done it a few times before (H&M collaborations with Stella McCartney and Sonia Rykiel and once for Simple Minds tickets). But the culture of the people who camp out on the sidewalk all night for sneakers makes me especially curious. So when I heard that the The Life of Pablo Pop Up (a three day event selling merchandise for Kanye West’s current tour) was coming to Toronto, I decided to get in formation.

I’m also a strong believer that West is an important cultural figure. Especially how his work intersects between art and commerce. In this case, West was selling goods that will probably also be for sale at his concerts so part of the art is the experience.

I went to the Pablo Pop Up on the second day.This gave me time to gather some intel from the first-day shoppers. According to social media, the shop was all garments, with the lowest priced baseball caps costing $55 CDN. You were not allowed to try on items in advance. Instead customers were given a sheet with the pictures of the merch and instructed to circle their selections (images of these sheets were all over social media on the first day). All items featured each Pop Up city’s name. Most also featured a lyric or quote screen printed with West’s collaborator  Cali Thornhill DeWitt’s signature gothic lettering. I decided that I would get a white long sleeved t-shirt with the saying “I Love You Like Kanye Loves Kanye.” It cost $90 so I rationalized it as investing in an art multiple.

I spent just over four hours in line. I got to meet a huge cross section of humanity — hip hop fans, tourists who had travelled from as far away as Buffalo, cool kids and me, the oldest person in line. There were the sneaker heads  who collect brands like other amass watches or Royal Doulton figurines. There were also people like me who were just fans. And even though the merch prices seemed insane, for those who couldn’t score tour tickets for love or money, this was as close as they were going to get to Kanyé this year.

To make it feel even more like street theatre, there was a steady stream of Queen West hipsters driving or strolling by and ask what we were lining up for.

But mostly there were the resellers. Staffers patrolling the lineup warned us that quantities were limited because they were trying to prevent price gouging on eBay. But they didn’t seem to mind the price gouging in the lineup. There was even a crew in a parking lot beside the pop up shop selling Pablo merch and Yeezy Boosts (which weren’t on offer inside). As the hawkers worked the line with there warnings of everything being sold out, security would warn the crowd that the resellers were just exaggerating to make a profit.

And then, when we were about ten feet from the door, security told us that they were sold out of most things including the shirt that I wanted. I comforted myself by wishing that restock would come through in time and if it didn’t, well I would save myself $90. 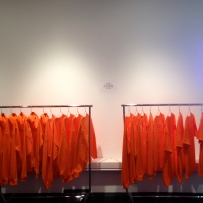 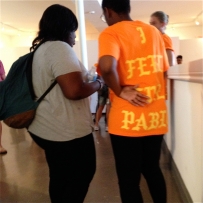 Inside waited a minimalist oasis. As a merchanding exercise it was pure genius. They only let 15 people in at a time. And while you couldn’t try the garments on, there were about 20 staffers of all shapes and sizes to give you an idea of how the articles would look (mirrors existed only to take selfies and document your existence in the space). The staff were super friendly and helpful. Every other time I’ve queued up for something, by the time one reaches the end of the line, there’s a roiling feeling of  entitlement. People behave like animals and grab at every garment in sight. But here, perhaps because of the bonhomie and high staff to customer ratio, it felt like we were walking into West’s embrace.
And they had my shirt (albeit in an XXL)!