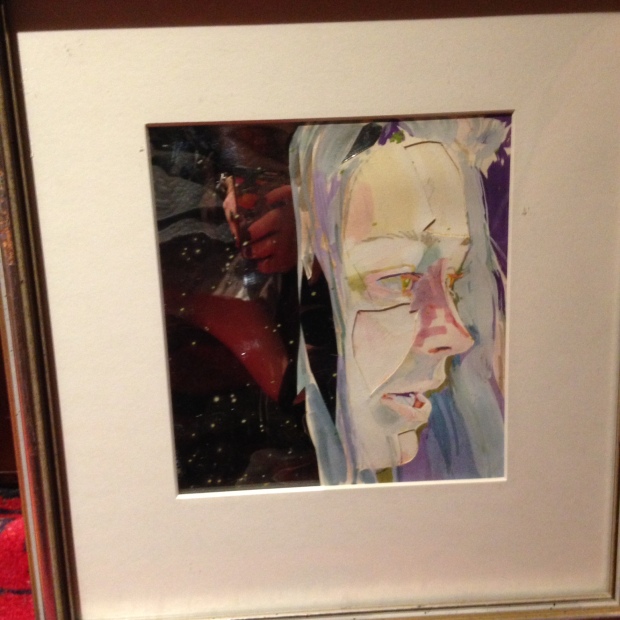 So I was at my new favourite hunting ground — the Old Weston Flea Market — when I espied this groovy collage. It’s a mix of water colour and and some sort of silvered material. The strange 1970s starchild quality and my recent obsession with works of art on glass meant that I had to have it. It wasn’t until I got it home that I noticed that it was signed Tom Hodgson ’78.

Hodgson was one of the members of the Canadian abstract expressionist art collective Painters Eleven. The group, which also included Harold Town and Jack Bush, got together in 1953 to promote their shared interest in abstraction (though they never had a collective manifesto and each artist worked in his or her own vocabulary). The group disbanded in 1960 and Hodgson (who was apparently the wild man of the outfit) went on to teach at the Ontario College of Art. While he was primarily an action painter, he went through a pop art phase in the 1970s (this work falls squarely into that era).

I have found a lot of art this month (I’ll post about the runner’s up tomorrow) so what makes this one the best of the month? Even though Hodgson is one of the most undervalued of the Painters Eleven, its still by an artist associated with an important movement in Canadian art. Value-wise, its a one-of-a-kind work, which usually trumps prints (even ones by more important artists like Kenojuak Ashevak or Norval Morrisseau). And yes, there are condition issues and there’s not as much interest in Hodgson’s post abstract expressionist works. Still it makes me happy to look at. And that’s all that matters.

One thought on “Find of the Month: Tom Hodgson Collage”