Magic Pony and Narwhal Contemporary have been having a destash.

In January, before I went to Sweden,  I picked up a few pieces. Pictured above are a Team Macho piece from the 2012  Merlin Years show.

And I got this Gary Basemen print (which I need to get framed. Which I think dates from around 2007.  I feel like a real collector now! 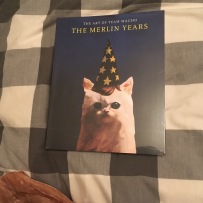 But that’s not all! I also picked up some monographs from shows by Marcel Dzama, Frohawk Two Feathers and Team Macho.

One of the first shows I saw at Magic Pony was for the artist Nathan Jerevicius “Forests Have Feelings Too” show in 2004. This is one of his owl windups.